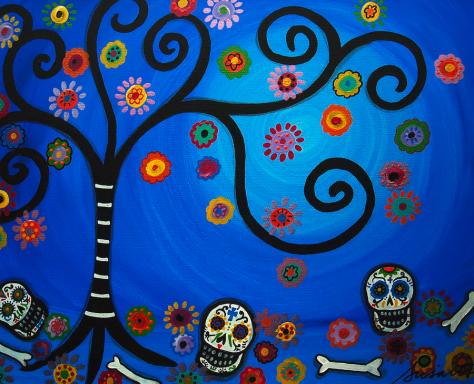 Day of the Dead

The Day of the Dead is a unique festival that is the result of 16th century contact between Mesoamerica and Europe. Conceptually, it is a hybrid, owing its origins to both prehispanic Aztec philosophy and religion and medieval European ritual practice. Ceremonies held during the Aztec summer month of Miccailhuitontli were mainly focused on the celebration of the dead. These were held under the supernatural direction of the goddess Mictecacihuatl. (1) Both children and dead ancestors were remembered and celebrated. It was also during this month that the Aztecs commemorated fallen warriors. According to Diego Duran, a 16th century Spanish priest, the Aztecs would bring offerings of food to altars in honor of the dead. They would also place small clay images that were supposed to represent the deceased on these same altars. (2)

When the Spaniards arrived in the 16th century, they brought the Christian Holiday of All Soul’s Day with them. This was a Roman Catholic holy day commemorating the dead in general as well as baptized Christians who were believed to be in purgatory. Spanish priests were quick to see a correlation between the Aztec and Christian celebrations so moved the Aztec festival from summer to fall so that it coincided with All Soulsâ day. This was done in the hopes that the Aztec holiday, which the Spaniards considered to be pagan, would be transformed into an acceptable Christian holiday.

The result of this cultural blending is an event where modern Mexicanos celebrate their ancestors during the first two days of November, rather than at the beginning of summer. While this modern festival has Christian components, it still maintains its indigenous Native American ones.

Across Mexico, activities associated with Day of the Dead are fairly consistent from place to place. On the first day, families visit the graves of their relatives. During this time, they decorate the gravesite with flowers, earth, and candles. The also hold a kind of picnic at the graveside where they interact socially among themselves and with other families and community members who are all gathered at the cemetery. The stories that are exchanged by the families often feature other people who are also buried in the same cemetery. In this way, Day of the Dead acts as a method of social cohesion between different groups of people. Folks gathered around the graves are there not only to celebrate their ancestors, but to celebrate the role that those ancestors played in a larger community.

The meals prepared for these picnics include tamales and pan de muerto (a special bread in the shape of a person). Many people believe that it is good luck to be the one who bites into the plastic toy skeleton hidden by the baker in each rounded loaf. Sweets are also included in the feast. These include, cookies, chocolate and sugar skulls. Friends and family members exchange gifts consisting of sugar skeletons or other items with a death related iconography. Often times, a gift is more prized if the skull or skeleton has one’s own name written on it with icing. As in the case of pan de muerto, when the celebrant takes a bite out of the skull, the person symbolically “takes a bite of death” and thereby, inoculates themselves against the fear of death.

Decoration is not restricted to gravesites. Often times people set up home altars dedicated to the same relatives. These are profusely decorated with flowers (primarily yellow and orange marigolds and/or crysanthemums). These were called cempoa-xochitl and are a clear holdover from Pre-Columbian times. For the Aztecs, the color yellow referenced the autumn—a season when nature begins to die. The arc or arco that forms a semi-halo atop the altar is symbolic of the path taken across the heavens by the dead. As in the case of the gravesides, home altars are also adorned with religious amulets and food offerings. The foods chosen are generally those that the deceased enjoyed during his life. This can run the gamut to different kinds of fruit, to cigarettes, and alcoholic beverages. Mescal is a favorite. All in all, the altar represents a recognition of the cycle of life and death that is part of human existence. There is some slight variation in how Day of the Dead is observed in Mexico. For instance, its celebration in large cities, like Oaxaca, leans more toward the secular than the sacred. Also, foodstuffs and altar construction are, logically enough, dependant upon the natural resources of the area. Nonetheless, what seems to be maintained throughout is the remembrance of the dead and the celebration of the continuity of life and the community.

(1) This deity’s name means “Lady of the Dead.” She was the female counterpart of Mictlantecuhtli, the lord of the underworld.
(2) See, Diego Duran, Book of the Gods and Rites and The Ancient Calendar. Translated and edited by Fernando Horcasitas and Doris Heyden. Norman, University of Oklahoma Press [1971].

I have been to the  San Francisco’s Day of the Dead with my baby sister.