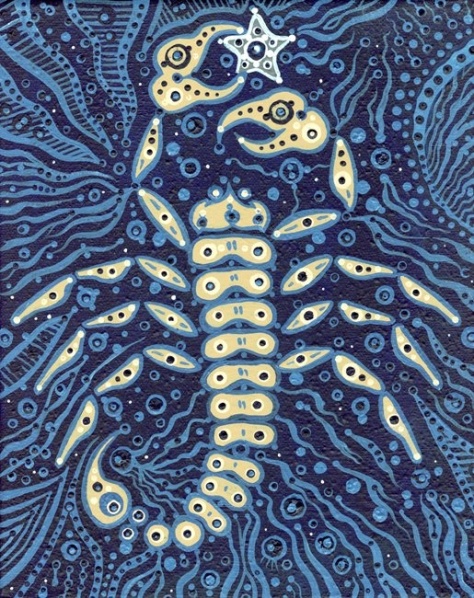 Well we just left Scorpio, but Scorpion’s haven’t left me. They’re everywhere. lol Starting with me, my sister (who I share a house with,) my boss, and my boyfriend. Yeah, that’s a lot of Scorpio….not to mention all of you whom are. So, I do not remember many dreams for awhile now, perhaps because I like to take something to sleep? I don’t know. At work we are talking about bugs and being scared by them, and a gal said I am terrified of scorpions, and I had a flash, a memory of a dream. In the dream I was under a tree, and like “Little Miss Muffet” who sat on her tuffet, a scorpion dropped down in front of me and I flicked it away. That’s it, so therefore the symbolic meaning of scorpions.

I love her website, so check it out for more symbols, totems. . .

A potent message the Scorpion chooses to express is that of protection and/or isolation. In fact, they themselves are quite solitary – part of the reason why they symbolize In fact, many people with the Scorpion as their totem tend to have brief spells of passion with a partner only to end the relationship and spend long period’s content to be alone.

The Scorpion will mate in an exotic, dance of passion and control. The Scorpion sex dance is one of beauty, control, and calculation.

The female allows her new offspring to ride on her back until they shed their first exoskeleton – then her offspring leaves her – all of them going off to their lone, solitary lives – another example of intensity in relationship followed by isolation.

Defensiveness/control/protection is evident in the Scorpion’s appearance – which seems to say “Do not trifle with me.” One look at this magnificent creature says “back off!” does it not?

As another symbol of protection – we can consider the venomous tip of the scorpion which numbs its prey as well as makes its prey chemically digestible for the Scorpion. Whether the Scorpion intends to eat the victim of its sting is irrelevant because its sting will most certainly protect the Scorpion in order for it to live another day.

In Samaria, the Scorpion is associated with the Sun, and ancient writings depict Scorpion-men guarding (protecting) sacred gateways leading to ascension, pleasure and enlightenment.

Death symbolism comes into play in Greco-Roman mythology where Artemis (Diana) used the Scorpion to sting Orion’s foot, which caused his death. Afterwards, Zeus (Jupiter) made the Scorpion a zodiac sign among the stars.

There are some species where the venom is actually the antidote for its sting (like cobras). In Egypt and Tibet this is seen as an omen, and the Scorpion is made into an amulet – signifying protection and warding off evil. In Africa, the Scorpion is also seen as a healing sign – its venomous oil used for medicinal purposes.

When we consider the message this incredible creature has for us, we must first consider its outstanding features, which are the Scorpion’s natural protective/defensive mechanisms. For example, consider the Scorpion’s hard exoskeleton as a line of defense. Also consider its sharp potentially damaging pinchers – not to mention its venomous stinger.

The symbol meaning of Scorpion, much like its appearance, can be little foreboding. That is, if we do not have the inner eyes to see the beauty and complexity of its symbolism.

Although the symbol meaning for Scorpion can appear a little harsh at first glance, when we really contemplate the Scorpion in all its wonder – then compare these meanings against the events in our own lives, we will inevitably find a common ground and learn some timely lessons from the Scorpion too.

Below are a few facts on the symbol meaning for Scorpion along with some cultural history and background.

Therefore, as a symbol meaning, the Scorpion represents protection. When the Scorpion makes an appearance in our lives, it is beckoning us to consider the following:

Symbolic Messages from the Scorpion

What needs protecting in my life?

Am I being overprotective?

Am I being defensive? Why?

Am I afraid of being vulnerable?

How do I feel about control in my life? (too much, too little)